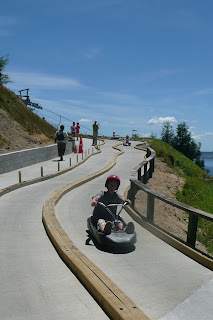 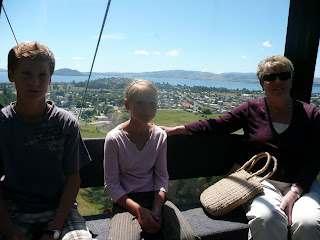 I could see people soaring down the huge hill as we stepped out of the car. I was really excited and couldn't help but imagine myself flying down the hill. We quickly walked towards the entry door and went in to be met by none other than..... a huge line. Waiting in line was the worst part of the whole thing. Then we remembered that we had not thought of how many rides to buy and how many we should each get to do, so we let some one in front of us to give us time to think. Finally we came to a decision, but unfortunately the person we let in front of us happened to be someone leading a Japanese cruise. As a result we had to let the rest of the cruise go in front too. After we paid we started to get anxious, the people were flying down the hills and occasionally you would here the screeching tires. We rode up the hill on gondolas which gave a good view over lake Rotorua. Getting to 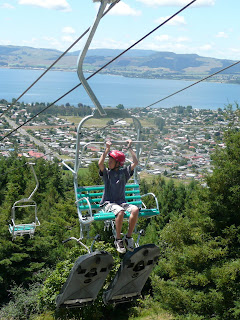 the top we jumped out and speed-walked over to the helmet boxes. After picking the smallest size we could find we looked around and headed towards the nearest place to go down on "The Luge". We all got into our carts and we were off speeding down the hill, then coming to a halt at the bottom, unable to resist a broad grin. Then we took a ski lift back up. We did the same again another two times, wishing we could do it more. We took the gondola to get down, an end to our journey. 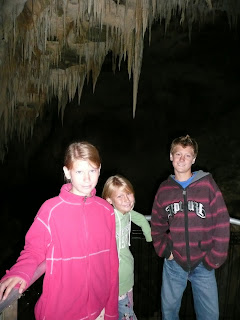 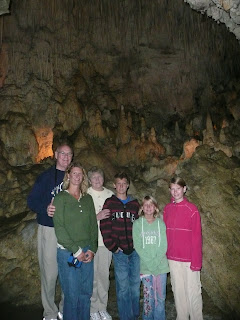 When my Grandma and Grandpa came to visit us, one of the things we did with them is the Waitomo Caves. The caves were really big and had lots of glowworms. The glowworms were on the cave ceiling and looked like tiny stars. The glowworms catch bugs to eat by hanging a sticky string from the ceiling. The bugs see the glowworm's light and they go toward it and then get caught. The glowworms life cycle goes egg, larva, pupa, adult. The eggs hatch after 20 days. After the eggs hatch they are larva and they catch food. Then they are pupa and that is when they are in a cocoon. Adults live only a few days and in the that few days they mate.
We saw some stalagmites (stalagmites look like icicles made from rock on the floor) and some stalactites (stalactites look like icicles made from rock hanging from the ceiling).
To get out of the cave we had to ride in a boat. We had to be quiet in the boat and it was completely dark except for the glowworms.
In 1887 the caves were first explored by Chief Tane and the English explorer Fred Mace. They got into the caves by building a raft of flax stems and they only had candles for light. After exploring the caves, Chief Tane began leading tours through the caves in 1889. 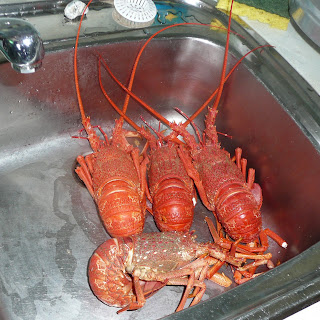 A couple of weeks ago I got my first chance to dive since getting my certificate back in November. Compared to the experience of learning to dive in mirk that made for about 3 feet of visibility, this was heaven. I went with another of the docs in town. He was a marine biologist in a former life, but gave it up to go into medicine. So this is the guy to go diving with.
He's got a bach (bachelor pad, a NZ slang thing--most who have them aren't bachelors, just people who didn't know what else to do with their extra money) out in Mahia, the town up the road from us. It's a peninsula, and either one side or the other usually has decently calm water. You can see it on the map about 20 miles from us up the coast. Anyway, we went down the coast a mile or so from his place and did a shore dive. A shore dive is when one parks away from the water, puts on lots of equipment (at the car), then lugs himself down to the surf and (if he survives) gets in and has a nice dive. The best part is not having a boat payment.
So a crayfish is a Red Rock Lobster. Yeah, sounds much more appetizing that way, doesn't it? Anyway, it is legal to just go down to the bottom, poke your head into any deep, dark cave or under any giant rock on the seabed, and pull out a lobster if you can. It's the greatest. One benefit of putting your head into sea caves and rock crevices is that the wetsuit gets warm rather quickly. The traditional way to catch crayfish is with one's hand. I agree, it was bad enough with the crevices and stuff, but it's tradition. Well, you know what I always say--tradition, schmadition. Most people who care about their limbs use a tool. The guy I went with had a hollow metal rod with a steel cable running through it; stuck out the end was a loop of that cable. He pulls the near end, and the loop at the far end gets tighter. See how that works? It's not the cray we're defeating here, it's bad Mr Crevice. The doc I was diving with says crayfish have got something going for them, they've been around for millions more years than us. Well, I've got two things to say to the crayfish: cerebellum and opposable thumbs.
After the looping comes the fighting the lobster into a bag under water. Later after that comes the dipping the lobster into melted butter, which is what one must focus very intently on whilst dragging the many pounds of equipment (strapped tightly to the body) out onto the rocks and up the beach to the car.
Mainly, it's not terrifying at all and lobster tastes good, so I think I'll do it again. Lobster must be 54mm wide at the tail to keep, and the daily limit is 6 lobster per person. Life, as they say, is tough. 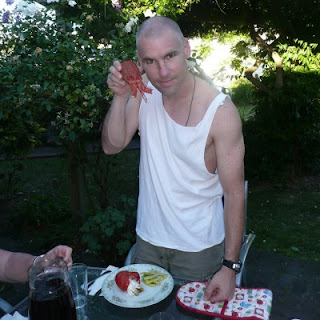 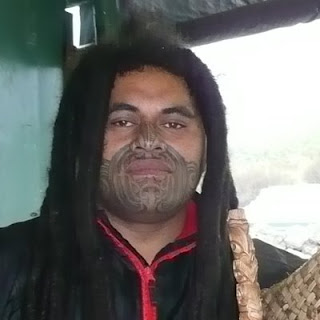 Moko is the term for Maori tattooing. I have seen more tattooing here than I have previously in my life. Most tattoos are quiet large, across the shoulder blades, on the arms or legs. The designs are intricate Maori patterns and are very beautiful and give an identity to a culture. Of particular interest or intrigue to me are the facial tattoos. I think this is because one would need to have very strong reasons to alter their face with tattoos and I admire the strength of their identity to their people in this way.
There is a difference between a moko and a tattoo. A tattoo is an art from done with needles and ink where as a moko is a scarring method done with bone and a pigment made from ashes leaving ridges in the skin. The head is seen as the most sacred part of the body. The purpose of the facial moko is to identify who you are. The design of the moko incorporates the story of your whakapapa (genealogy) and your rank. The more facial design the higher the rank. Men could receive a full face moko but women only wear moko on their chin and blacken their lips. Moko artists are very skilled craftsmen. They follow the lines of the face to accentuate facial expression.
Men stopped receiving moko around 1860 and the women in the early 1900's. The 1990's brought a resurgence of moko as a sign of cultural identity reflecting a revival of language and culture amongst the Maori. Today needles are often used to receive the moko but more and more people are returning to traditional methods. There are a few people around Wairoa with facial mokos. At first the site startled me - it is so different. Now, after spending some time participating in Maori activities I understand the deep cultural roots the wearer is identifying with and I respect that.