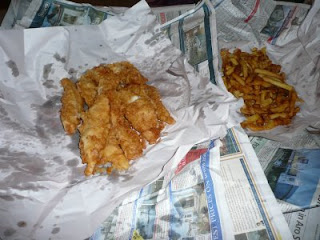 I still look at people oddly when they ask if you want to get some "fush and chups" for dinner. You want what? Oh, "fish and chips"!
My friend April knows that I am always on a hunt for good fish and chips! Just the right amount of batter, a little grease soaking the paper, a bit of salt and fish that melts in your mouth. Here in New Zealand, take out fish and chips is the equivalent to take out pizza at home. I have discovered the local fish and chips shop but have found I must limit myself as my system can only handle so much.
Ponderosa is the local shop. It is located in an abandon part of town but the shop is always full of customers. There is plenty to choose from beyond the standard fish. If it's seafood and you want it fried, they have it. We call ahead on a Sat. night and give our order of 8 fish and two scoops (french fries) please. 15 minutes later I walk out with two bundles of steaming food. At home I lay it on the counter, we open the layers of newspaper, get out the Heinz (no New Zealand tomato sauce is going to spoil these chips!) and we dig in. This fish just literally melts in your mouth. I eat it savoring each bite.
One night we decided to really splurge and get dessert as well - a fried Moro bar. A Moro bar is Cadbury's equivalent to a Milky Way. Now whoever thought of battering and frying a candy bar was a bit out of their mind. One bite is good and you think you are in heaven. Two bites are disgusting and you feel like you are in the pit of hell! 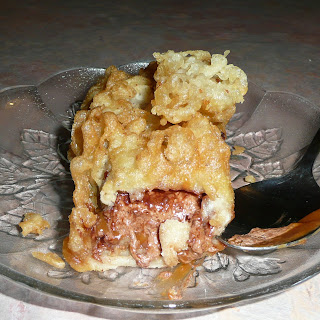 I know I will never find fish and chips as good as they are in this little town. It is one of those things that I will add to my list: Sechwan Empire (Chinese food) in Redford; Nachos (Mexican food) in Imlay City and now Ponderosa for fish and chips in Wairoa! 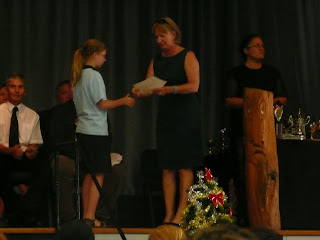 The end of the school year here is filled with classroom parties and end of the year festivities - the same as at home. Excitement is in the air with the anticipation of Christmas and 6 weeks off of school. An event my kids had not yet experienced, although I remember it in the school I attended as a kid, is end of the year Prize Giving.
Prize Giving ceremonies are a very big deal in this little town. Each school has several. You start with the "Sr. prize giving" for the upper grade levels. Then there is the "minor prize giving" ceremony for all the 2nd place winners and then the "Major prize giving" ceremony which you are invited to attend if your child is receiving a prize. The ceremony includes music performances with an emphasis on the Maori pieces. Prizes are given for everything: Sports, music, art, Maori, social skills and academics (there is a feeling that no one should be left out of receiving a prize). The student is awarded a trophy which will stay at the school and their name will be engraved on it along with all those before them.
I was happy that each of the kids received a prize: Damon - math; Maddie - best academics in classroom ; and Elena - gymnastics.
The Jr. prize giving ceremony ended with a speech by the Dux (pronounced "ducks"). The Dux would be our equivalent of a Valedictorian. The word "dux" is the Latin root for the word duke. It means the highest warrior and today is the top academic student. The Dux wore a Maori warrior's cape of feathers called a Korowai and gave a traditional, inspiring speech.
I have mixed feelings about the prize giving ceremonies. I see the benefit in awarding a child for excellence and giving them something to strive for. On the other hand I could see that the same kids win the same awards each year, leaving the rest to wonder what the point of working hard is. 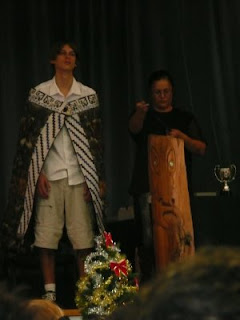 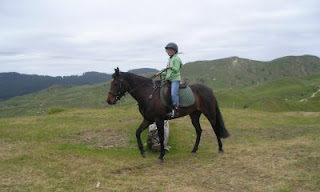 There are a lot of horses in New Zealand. One of my friends lives about 30 minutes, away, on a farm and her mom asked if I would like to spend two nights there and I happily said yes! So they piked me up and we had a pretty long car ride there - it was very curvy! I did not know it then but Sian also had over Courtney from school! When we got there we played around. The next day we got up early and got dressed and ready to ride. We had to get on riding boots and then go and get the horses! We fed them first and then we got them all ready to ride! 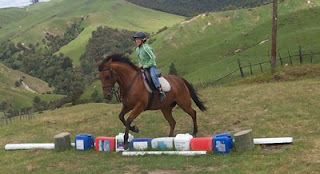 As soon as we were ready I got on one horse, Pee-Wee and Courtney got on Rain! Courtney, Sian and Grace her sister were much better riders than me. I had no idea what we were doing. Sian and Grace walked down while Courtney and I rode. I saw a bunch of jumps I would be jumping. When we got down there Sian asked me if I wanted to jump. Yep! So she told her sister, Grace, to take the rope and walk me through it. There were logs cut in half laid in a row and at the end there was a jump - it was not that high though! Grace took me to the start and I barley felt anything. Pee-Wee stepped over the logs. I said I wanted to keep on doing it, in fact I wanted to do something harder! Courtney rode around on Rain and did some jumps. "Here try this one." I was going to try something a bit harder now! Grace switched with Sian, she started to run with Pee-Wee and Woooosh! I jumped it! Soon after an hour I was jumping on my own! Sian takes riding lessons so she gives Courtney lessons! Sian sometimes told Courtney to jump something and I said I would before her if she didn't do it! In the end I did not end up doing those jumps though because Courtney did them!
I thought it was I great experience riding. I hadn't done it in a long time!!
-Elena! 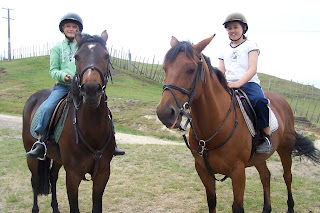 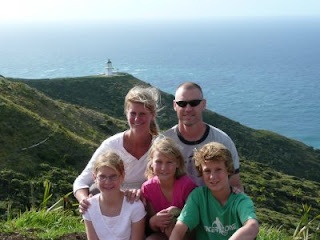 On Christmas Eve we drove from where we were staying in Paihia to Cape Reinga, where there is a lighthouse. The lighthouse is at the Northern tip of New Zealand and marks where the Tasman Sea and Pacific Ocean meet. We didn't walk all the way down to the lighthouse. From the lighthouse you can watch the tidal race, as the two seas clash to create unsettled water just off the coast. It was pretty, I liked it. It was cool to see where the Sea and Ocean meet. 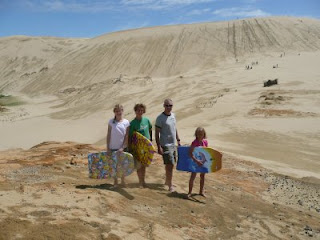 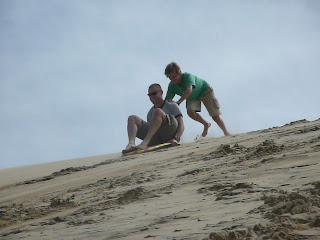 On our vacation to the Bay of Islands we went to the Himatangi sand dunes to go "sand dune sledding". The Himatangi sand dunes were once an important meeting place for Maori who regularly visited the area to collect fish and shellfish. The Himatangi beach is slowly moving westward due to sand movement caused by rivers, strong currents and westerly winds that characterize the region. After a long drive we finally got there. We were anxious to go to the top, with the dunes towering so high above us. My parents gave each of us a boogie board as an early Christmas gift. Taking the boogie boards we raced up at our top speed. After about 30 seconds at our top speed, we decided to take a much slower approach in trying to conquer the massive dune. At last we reached the top and laid down for some rest before attempting to ride the boogie boards down the steep slope. Running, jumping and diving in all the same motion we began to slide down the dune. This would have been great if the board had continued to slide with us, instead we got a mouth full of sand! Elena was the only one whose boogie board had slid with her because she had not taken the plastic covering of hers which made the bottom slippery. We all watched with envy as Elena flew down the dune. But then to Elena's unfortunate luck, the plastic covering began to rip. She kept moving but the board thought otherwise and stopped in its tracks, resulting in Elena going flying. After this unfortunate event we decided not to use the boogie boards anymore and to rent one with a plastic bottom instead. This board worked great! We first tried it on a smaller dune to get used to it, then moved on to the big dune. We all laughed (and cried) as we watched the others soar down the dune, but three turns tires you out pretty quickly (mainly the way up that tires you out), so we each took one last ride then packed up and headed out. 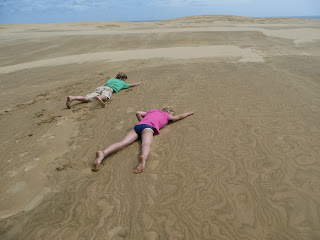 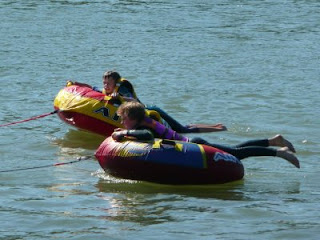 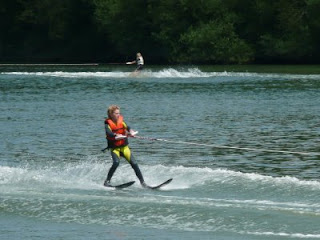 A lot of people have been water skiing but we have not been so lucky. Now that we are in New Zealand we get to experience new things and water skiing is one of them. When we went to the water skiing club they put me in a group with a bunch of little girls and my sisters. Why would they do that to me, put me with my sisters?!? Oh well, it all worked out in the end. They did a short demonstration of how to get up on the skis (on land) and then our group got into the boat. I had to wait because my turn was last. When Elena went she started on the bar (a bar that sticks out the side of the boat for learners to hold onto). The boat started to go and she quickly fell down but was still hanging onto the bar, even after her skis had fallen off her feet (I have know idea why). It was finally my turn. I put on the skis and hopped into the water. With everyone leaning in the boat to one side so that the bar was low enough for me to grab, I grabbed it and scooted my hands down to the end of the bar. I yelled "hit it" and the boat began to go, faster and faster my feet going up and down from the small wake until the boat came to a stop. Then they hooked a short rope to the bar and they handed me the handle. Once again the boat started up and I hung on until they came to another halt. Then they hooked up a really long rope to the back of the boat and handed me the handle. The long rope was fun. I went back and forth and then eventually tried to go over the wake. Finally Maddie went and made it all the way to long rope, then we had lunch. After lunch our group got back into the boat and Elena made it up to short rope. When it was my turn they told me to put on only one ski, I was going to single ski! They started me single skiing on the bar. After doing that they put me on short rope with single ski. Single ski is a lot harder than two skis. That was the end of skiing that day for me, but Maddie skied next on the long rope. After everyone was done skiing they got out the biscuits (inner tubes) and hooked them up to the boats. We had the "meanest" time riding the biscuits, and we were going "fast as"!
That's really all that happened on our day full of water skiing.
~Damon
Posted by Damon at 1:00 PM 1 comment: