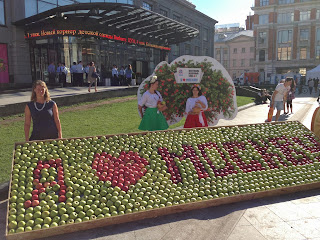 The wheels touched down on the tarmac and the plane burst into applause.  The girls and I looked at each other and started to laugh.  "Welcome to Russia" seemed to be the greeting.  Weary we made our way smoothly through immigration then stood waiting at the luggage belt.  We waited and waited until all the luggage had been claimed.  We stared at the empty belt with our shoulders drooping a bit realizing our luggage had not made the same journey we had.
The woman at the lost luggage counter was nice.  Her heavy accent caused me to look at the girls frequently hoping they had caught a word I had not.  She handed over reams of paper for me to fill out.  Each time I made a small mistake she grabbed the paper away sighing "no good, no good" and had me start over.  Perfection was a must.  She ask that I list and claim a value for everything in the 6 suitcases and 3 carry-ons that had been door checked back in Grand Rapids.  I really had no idea.  The girls and I settled in on the task starting with the memorable items.  "1 flute, 1 camera, 6 maple syrup, underwear - "what do you think girls, 30 pairs?" - t-shirts possibly 20?
She asked the girls to wait with her while I walked the papers over to customs.  This seemed logical.  I would be happy to clear my list of things so that as soon as the suitcases arrived they could be delivered.  The gentleman was nice.  I slid the papers across the desk and he began copying.  New papers with my lists and luggage tag numbers added to the stack I had given him.  He paused and asked a question to clarify an item then began copying again.
Eventually the red stamp came out.  Boom, boom, boom.  Three stamps carefully placed on each page. Papers were placed in different piles then he handed me the remaining stack.  I trudged with my papers over to the original desk where the girls were waiting.  The woman took the papers, inspected them then began ordering them into more piles.  She handed me a single paper.  "This is your copy."  A phone number was circled and a tracking number underlined.
We walked out the exit and into Chad's arms.  It took him awhile to realized we had no luggage.
It's been three nights now.  Each evening we change into Chad's boxers and t-shirts.  I drop our clothes in the washing machine so they will be clean the next morning.  A new friend spent a fair amount of time on the phone for us today.  Apparently the suitcases have made it to Moscow, they just seem to be a bit reluctant to hand them over.  A bag of clothes sits by the door.  Some new friends to the girls raided their closet for "teen" clothes.  A fresh look in the morning will be a welcome site!